Warning: "continue" targeting switch is equivalent to "break". Did you mean to use "continue 2"? in /homepages/10/d69232514/htdocs/projektarbeitaugust/wp-includes/pomo/plural-forms.php on line 210
 My Garage - WW2 Dodge 3/4 Ton Weapon Carrier Trucks
Direkt zum Inhalt

…also known as: „My virtual Garage“

Welcome to my private „virtual garage“ with photos on my former Dodge WC52 and my actual Dodge WC51 project – as well as on my previous vehicles as Mini and Mini Coopers, classic Series Land-Rovers, Mazda MX-5 NA roadster and others, that I have owned over the years since about 1984.

About my Dodge WC51

A compilation of pictures on my actual Dodge WC51 at several events & locations during the last years can be found here
(please notice: click on „next image“ to open the next picture in each gallery!).
Link: My Dodge WC51 photos.

About the ongoing „rolling rebuilt“ of my Dodge WC51:
Link: My Dodge WC51 rebuilt photos.

Some photos of the cylinder head exchange of my Dodge WC51 and „garage impressions“ with friends in place can be found here:
Link: Dodge WC51 cylinderhead replacement.

About my Dodge WC52

Some pictures of my former Dodge WC52 (now sold to a collector in Russia) at several events & locations can be found here:
Link: My Dodge WC52 photos.

A compilation of photos on the „ground up“ rebuilt of my Dodge WC52 in France as a „father & son“ project by the previous owner in about 2006-2009 can be found here.
As you can see, has the WC52 been converted to a bomb lift truck in WW2 and then been in use with the French Army after.
Sold to civilian owners it was then in use as a recovery truck of a local Garage (painted yellow) and then finally as a support vehicle of a Circus. – Then painted in classic Circus colors white, red and blue, before it was bought and rebuilt by a Jeep owner and his son. Have a look at the gallery:
Link: WC52 Bomb Lift truck project.

Some photo’s of the „second stage“ of the rebuilt of my Dodge WC52 after I bought it can be found here:
Link: My Dodge WC52 rebuilt photos.

The new Garage for my Dodge

In 2014 I was forced to give up my old Garage after more than 20 years so I had to find a new home for my tools, spares and my Dodge.
It took me about 5 months to move everything to the new location and to repair with my garage colleagues the infrastructure as light, water, toilets etc. and to install a kitchen as well.
Some pictures can be found here:
Link: My new Dodge garage (a.k.a.: Camp Maintal).

My previous vehicles at a glance:

Before I bought my first Dodge I was drving more than 25 years several Series Land Rovers (II, IIA, III and Stage One V8) – most of them with 109“ wheelbase and ex. MOD FFR (Fitted For Radio). Some pictures of my old 4×4 vehicles can be found here:
Link: My former Land Rover Series I – III photos.

About my former Mini & Mini Coopers (the wild first 20 years…)

Grown up with classic Mini Coopers my first car was the Mini 1000 of my mother – that I lateron crashed on a Mini Meeting in Finland (then re-named: „The Elk Hunter“).
Some pictures of those crazy years with up to 17 Minis on the yard can be found here:
My former BMC/BL Mini and Mini Cooper photos. 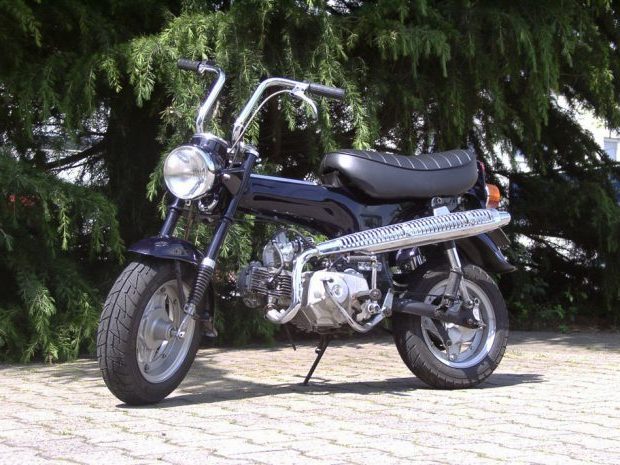 About my former Honda Dax

As a child to young for a Honda Dax ST-50 or ST-70 I got a used one at my 30iest B-Day (+ surprise with long legs).
Rebuilt and years with the Honda in the living room followed. Sold it then when I was divorced.
Link: My former Honda Dax photos.

About my former MX-5 NA (the black beast)

The older the boys – the faster the toys… Some pictures of my former MX-5 NA with 1.9 litres engine and pimped up to 164 hp can be found here:
Link: My former MX-5 NA photos.